Jimmy Gatz, now Jay Gatsby, remembers his own early love for Daisy Fay. He won and lost her love when he was a young Officer going off to the Great War.

Gatsby looks at a flashing green light over the bay willing Daisy, who now lives in East Egg with her husband Tom Buchanan, to come over the water to his beautiful mansion, and back to him.

Nick is settling in at the cottage next door to Gatsby's palatial mansion. He waves goodbye to his housekeeper and leaves for his new job as a bondsman in New York. 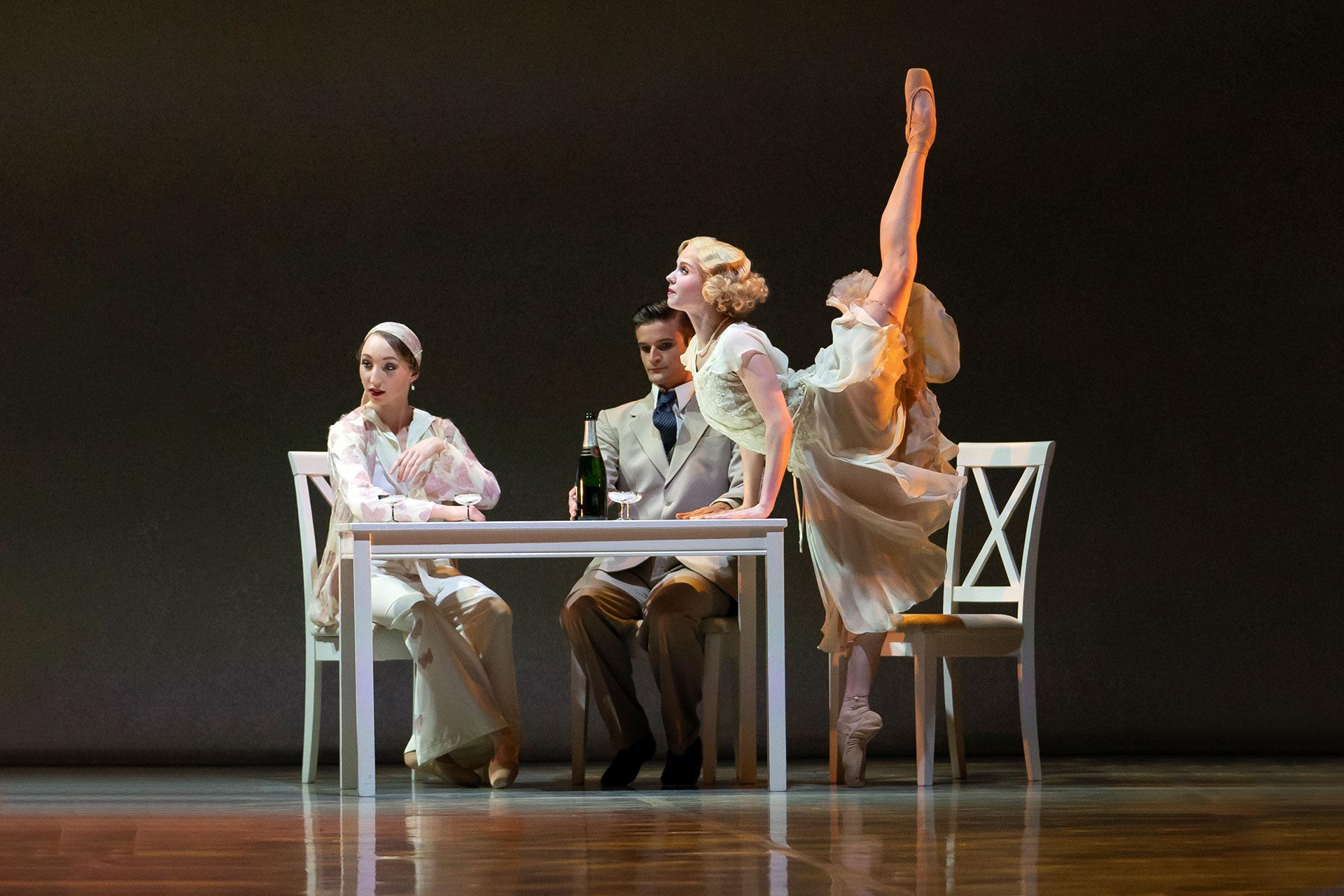 Nick has been invited to dinner by Daisy, his cousin, at her home across the bay in East Egg. He meets Daisy's friend, Golf champion Jordan Baker, and Tom and Daisy's little daughter. As Tom is called to the telephone, Nick senses the tension between the husband and wife. All is not as it should be with their marriage.

Myrtle Wilson prepares to go out as her husband George works in his garage. The telephone rings and Myrtle takes the call from her secret lover, Tom Buchanan. She makes herself ready and runs for the train to nearby New York, leaving her husband lonely and unsuspecting.

The streets of New York

Tom, with Nick, waits for Myrtle to arrive for their assignation. She leaps into Tom's arms and they set off to the New York apartment Tom has taken for their secret affair. Myrtle welcomes her neighbours for a party. Tom increasingly wants to get Myrtle to himself but her evasions and teasing eventually anger him so much that he hits her. The shocked little party disintegrates. Tom is ashamed and contrite but Myrtle is loving and forgiving as they passionately end their quarrel.

One of Gatsby's huge parties is in motion, attended by celebrities, film stars, directors, actors, boxers, senators, flappers, businessmen - and anyone who cares to come along and have fun. Nick finds Jordan and they dance with everyone else as the party grows ever more wild. As it draws to a close Nick and Jordan join Gatsby on the dock and he tells them of his past love and its loss.

Gatsby, aware that Daisy has been invited for tea with Nick, has flowers delivered to the cottage and he sends over a beautiful silver tea service. Daisy arrives and is welcomed by Nick. Gatsby appears and he and Daisy delight in seeing each other again. Gatsby invites them to his mansion to impress Daisy with his gracious home.

Gatsby's mansion and the room of mirrors

Another big party is underway to which Gatsby has especially invited Daisy and Tom. Unseen by her husband Daisy and Gatsby relive their love with shadows of their past selves. Eventually Tom takes his wife from the party which he has clearly not enjoyed.

The Wilson's bedroom at the Garage

Myrtle is pining for Tom as George surprises her in the bedroom. He has discovered a valuable bracelet and now suspects his wife of having an affair. He tries to regain her affections but in vain. He insists that she pack a suitcase – he has decided to close the garage and take his wife away.

Nick and Gatsby have been invited to Tom and Daisy's home for lunch during the intense heat of a New York summer. Tom is secretly investigating Gatsby's wealth and background. With growing tensions they decide to go into the city for the rest of the hot afternoon. Gatsby and Tom switch car keys and set off, Daisy and Gatsby in Tom's blue coupé, and Nick, Jordan and Tom in Gatsby's yellow car.

George is packing up their belongings and Myrtle is upstairs in their bedroom. Tom, driving Gatsby's yellow car, pulls up for petrol. He shakes George out of his lethargy and sees the cases and boxes being packed for departure. There is no sign of Myrtle and as he forces George to fill up the car Tom realises that he is losing her. He also has suspicions now about his own wife's relationship with Gatsby. Myrtle comes down from the bedroom in time to see Tom, Jordan and Nick as they drive off to New York. She desperately tries to get Tom's attention but is too late.

The cars arrive in New York and they all take a suite at the Park Plaza Hotel. They try to relax in the cool room but the tensions between them all from earlier in the day are rising. Eventually Gatsby tells Tom that his wife has never loved him and that she is coming away with him. Daisy is confused and unsure of her feelings for the two men. Tom now takes his chance to expose Gatsby's corrupt past. Gatsby denies it all and Daisy asks her husband to take her home. Tom gives his wife the keys to Gatsby's car and she runs out followed by Gatsby who throws Tom's own keys to him. Gatsby and Daisy leave for East Egg in the yellow car as a storm breaks.

Myrtle, carrying her suitcase, manages to break open the now locked garage door. She sees the yellow car and runs towards it. She is struck by the speeding car and killed. Neighbours carry her inside and as her husband returns to the garage he sees the body of his wife. Tom is driving back to East Egg with Nick and Jordan and they stop at the accident. He sees that it is Myrtle who has been killed. They leave the garage and the desolate George, with Tom displaying his own grief and convinced that Gatsby has killed his mistress.

Outside Tom and Daisy's home

Gatsby and Daisy arrive in East Egg and Daisy is devastated about the accident. She throws the keys of the car to the ground – she was driving. Gatsby picks up the keys and they part. Gatsby hides in the trees as Tom comes back with Nick and Jordan. Tom is clearly very upset but he invites them in for something to eat. Jordan tries to persuade Nick to come into the house but he refuses. He believes that his friend Jay Gatsby has killed Myrtle and driven on. Gatsby comes out from the trees and Nick accuses him of murder. Gatsby tells him that he wasn't driving the car. Nick leaves him behind in Daisy's garden.

George Wilson takes a gun and sets off in search of the driver of the yellow car.

Tom comforts Daisy and they are a family once again.

George Wilson approaches Tom with his gun. Tom points him towards Gatsby's home.

Gatsby tells Nick the story of how he got his wealth and made himself into a new person with the dream that his prize would be Daisy.

Gatsby sits on the dock.

Jay Gatsby's dream of Daisy is at last realised in his mind.